How long will the recession last? I don't know for sure, but we may be able to say something about how long labor markets will continue to struggle even after output growth begins to increase. The next two graphs show the unemployment rate and the employment to population ratio since 1948: 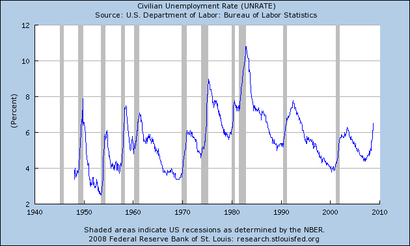 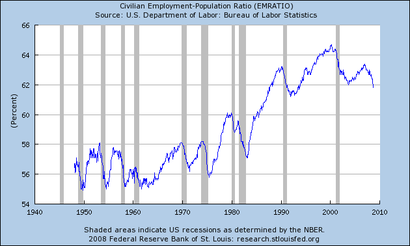 Notice that in the last two recessions, unlike those that came before, these measures of labor market performance continue to deteriorate even after the official end of the recession (as dated by the NBER). The delayed recovery can be seen more clearly in a graph of the two series since 1985: 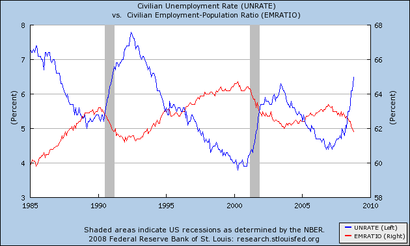 This means that once the trough of the recession in output growth is reached - and we are not there yet - then there will be a considerable period of time before the labor market recovers if this downturn is like the last two.  How long of a time period?

Output growth troughs very near the NBER assigned date for the end of recessions: 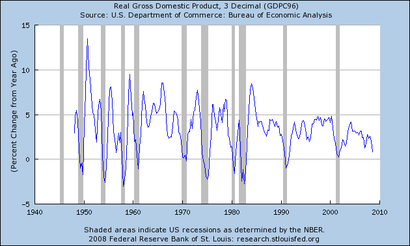 Focusing on the last two downturns, the trough of the 1990-91 recession was in March 1991. However, the peak unemployment rate wasn't until June, 1992, 15 months later. The employment to population trough was a bit earlier, December, 1991, but it was still 9 months later (and there is a second, slightly higher trough a few months later - see the red line in the second graph above).

Thus, once the recession has officially ended, the average number of months until unemployment peaks is 17.5, and the average time until the employment to population ratio troughs is 15.5 months.

So, if the past two recessions are a reliable guide, expect around five quarters or so of additional labor market problems even after output growth turns around.

Is the past a reliable guide? I wish I could answer, but as far as I know the exact reason for the increased time until the labor market recovers observed in the last two recessions is unkown (there has always been some delay, but lately it has increased considerably). One reason could be that labor hoarding has increased due to higher training costs or some other reason. With firms retaining more labor through the downturn and hence more excess capacity than in the past, they can expand output once the recovery starts for a longer period of time without increasing the labor force, or at least not increasing it by much. With employment growing slower than population, and also growing slower than the number of people looking for jobs, the measures above would increase for awhile even after the economy turns around. If firms also install labor saving equipment at a greater rate than in the past as the recovery begins, or if the equipment is installed at the same rate but it is even less labor intensive than in the past, the growth in employment could be even slower. But as I said, even though there has been lots of research into this question, the exact reason for the change in labor market behavior is not known with certainty.

Listed below are links to weblogs that reference Slow Recovery of Labor Markets:

How long will the recession last? I don't know for sure, but we may be able to say something about how long labor markets will continue to struggle even after output growth begins to increase. The next two graphs show the unemployment rate and the employment to population ratio since 1948: