'Shattering Myths to Help the Climate'

Shattering Myths to Help the Climate, by Robert Frank: Each new climate-change study seems more pessimistic than the last. This May and June, for example, were the hottest ones on record for the planet. Storms and droughts occur with increasing frequency. Glaciers are rapidly retreating, portending rising seas that could eventually displace hundreds of millions of people.

Effective countermeasures now could actually ward off many of these threats at relatively modest cost. Yet despite a robust scientific consensus that greenhouse gas emissions are at the root of the problem, legislation to curb them has gone nowhere in Congress. In response, President Obama has proposed stricter regulations on electric utilities, which some scientists warn may be too little, too late.

Why aren’t we demanding more forceful action? One reason may be the frequent incantation of a motley collection of myths, each one rooted in bad economics...

July Employment Report, by Tim Duy: The overall tenor of the July employment report was consistent with the song that Yellen and Co. are singing. Labor markets are generally improving at a moderate pace, yet despite relatively low unemployment, there is plenty of reason to believe considerable slack remains in the economy.

The headline nonfarm payroll number was a ho-hum gain of 209K with some small upward revisions for the previous two months. Steady above 200k gains this year are lifting the 12-month moving average of jobs higher: In the context of the range of indicators that Fed Chair Janet Yellen has drawn specific attention to: 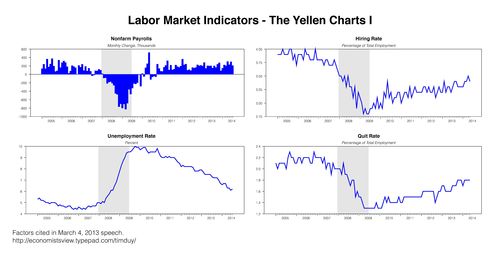 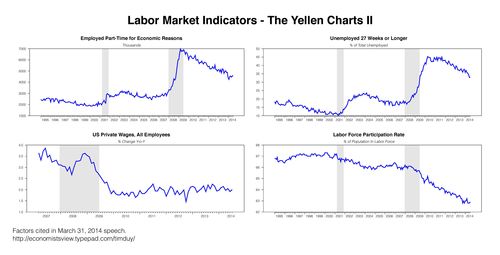 Consistent with the consensus of the FOMC as revealed at the conclusion of this week's FOMC meeting, measures of underutilization of labor remain elevated. Notable is the flat wage growth - clearly a ball in Yellen's court. Moreover, these numbers should override any enthusiasm over yesterday's ECI report, which is obviously overtaken by events.

In other news, inflation remains below target: 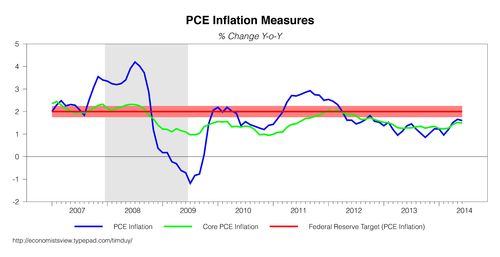 although pretty much right at target over the past three months: 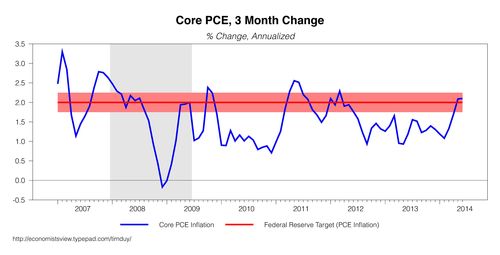 Numbers like these gave the Fed reason to upgrade its inflation outlook this week. If these numbers can hold up for the next several months, you will see the year-over-year number gradually converge to the Fed's target, clearing the way for the Fed's first rate hike in the middle of next year (my preference remains the second quarter over the third).

On the whole, these data continue to argue for a very gradual pace of tightening. The Fed will be in rush to normalize policy until labor underutilization approaches normal levels and wage growth accelerates. Since it's Friday and everyone is looking forward to the weekend, we can avoid re-inventing the wheel on this topic and just refer to Binyamin Appelbaum's report on the FOMC meeting, in which he quotes some random commentator:

The Fed’s chairwoman, Janet L. Yellen, and her allies have taken a more cautious view, arguing that the decline in the unemployment rate appears to overstate the improvement in the labor market, because it counts only people who are looking for work. Ms. Yellen has said she expects some people who dropped out of the labor force to return as the economy continues to improve, and she has pointed to tepid wage growth as evidence that it remains easy to find workers.

“The recovery is not yet complete,” she told Congress this month.

The statement suggested that the committee continued to back Ms. Yellen’s view, said Tim Duy, a professor of economics at the University of Oregon.

“The committee as a whole is still willing to give Yellen the benefit of the doubt,” Mr. Duy said. “And honestly they have good reason. Until you get upward pressure on wages, it is terribly difficult to say that she’s wrong.”

In recent conversations with Oregon businesses, Mr. Duy said, he heard repeatedly that it was becoming harder to hire workers, but also that businesses were unwilling to offer higher wages as an inducement, because they doubted their ability to recoup the cost through increased sales or higher prices.

Bottom Line: Nothing here to change the outlook for monetary policy.

The unemployment rate was essentially unchanged at 6.2 percent, as there was little change in either the size of the labor force or the number of unemployed. Involuntary part-time employment edged down slightly, reversing part of a jump in June. It is now 669,000 below its year-ago level. Voluntary part-time employment decreased modestly, but is still 502,000 above its year-ago level. This would be consistent with some workers opting to work part-time now that they no longer need to get health insurance through their job as a result of the Affordable Care Act.

There was little change in employment or unemployment rates for most demographic groups, although the employment-to-population ratio for African Americans edged up to 54.6 percent -- its highest level since January of 2009. Workers over age 55 accounted for all the reported employment growth in July, with an increase in employment of 159,000 compared to 131,000 overall. However, their 43.4 percent share of employment growth over the last year is considerably less than it had been earlier in the recovery.

The duration measures showed little change, with average duration of unemployment falling back 1.1 weeks to 32.4 weeks, while both the median duration and share of long-term unemployed increased slightly. The share of unemployment due to people voluntarily quitting their jobs was essentially unchanged from the prior two months at 8.9 percent. This is up from 8.5 percent last July, but still well below the 11-12 percent shares in the years before the downturn.

In the establishment survey, the goods-producing sector was surprisingly strong, adding 58,000 jobs. However, the pace of growth is likely to slow in the month ahead. The 22,000 job growth reported in construction is likely faster than can be supported by the modest pace of spending growth in the sector. The 28,000 rise in manufacturing employment was driven largely by a 14,600 increase in jobs in the auto industry. This, in turn, was likely due in part to the timing of shutdowns for retooling and will be partially reversed next month. The average workweek actually fell in manufacturing and the one-month diffusion index plunged from 63.0 to 53.7, so we are likely to see weaker growth going forward. Nonetheless, it is worth noting that employment in the auto sector reached its highest level since July, 2008.

This report provides little evidence of any pick-up in wage growth. The average hourly wage rose at a 1.82 percent annual rate over the last three months compared with the prior three months. This compares to a 2.0 percent increase over the last year. While a tightening labor market should eventually allow workers to see some gains in real wages, the economy does not appear to be at this point yet.

Overall, this should be seen as a modestly positive report. The slower pace of job growth is not surprising given how out of line recent job growth has been with the modest GDP growth we have been seeing. (First half growth averaged 1.0 percent.) It is likely that future months will see weaker growth as manufacturing and construction will see slower job gains. We are still far from the point where the labor market is strong enough that workers will be able to get wage gains in line with economic growth.

"Are we as societies even capable of taking good policy advice?":

Knowledge Isn’t Power, by Paul Krugman, Commentary, NY Times: ...I’ve been looking at surveys from the Initiative on Global Markets, based at the University of Chicago. For two years, the initiative has been regularly polling a panel of leading economists... It usually turns out that there is much less professional controversy about an issue than the cacophony in the news media might have led you to expect.

This was certainly true of the most recent poll, which asked whether the American Recovery and Reinvestment Act — the Obama “stimulus” — reduced unemployment. All but one of those who responded said that it did, a vote of 36 to 1. ...

As it happens, the odd man out — literally — in that poll on stimulus was Professor Alberto Alesina of Harvard. He has claimed that cuts in government spending are actually expansionary, but relatively few economists agree... Nonetheless, back when European leaders were making their decisive and disastrous turn toward austerity, they brushed off warnings that slashing spending in depressed economies would deepen their depression. Instead, they listened to economists telling them what they wanted to hear. It was, as Bloomberg Businessweek put it, “Alesina’s hour.”

Am I saying that the professional consensus is always right? No. But when politicians pick and choose which experts — or, in many cases, “experts” — to believe, the odds are that they will choose badly. Moreover, experience shows that there is no accountability in such matters. Bear in mind that the American right is still taking its economic advice mainly from people who have spent many years wrongly predicting runaway inflation and a collapsing dollar.

All of which raises a troubling question: Are we as societies even capable of taking good policy advice? ...

The only piece of our system that seemed to have learned anything from history was the Federal Reserve, and the Fed’s actions under Ben Bernanke, continuing under Janet Yellen, are arguably the only reason we haven’t had a full replay of the Depression. ... Sure enough, there are moves afoot in Congress to take away the Fed’s freedom of action. Not a single member of the Chicago experts panel thinks this would be a good idea, but we’ve seen how much that matters.

And macroeconomics, of course, isn’t the only challenge we face. In fact, it should be easy compared with many other issues that need to be addressed with specialized knowledge, above all climate change. So you really have to wonder whether and how we’ll avoid disaster.