The employment report is essentially unchanged from last month with unemployment holding steady at 9.7%. Here are some discussions of the report.

There is a lot of optimism about this report due to the fact that it appears that the rate of deterioration in labor markets is slowing and perhaps even about to turn the corner. But I find it hard to be upbeat about an economy that is moving sideways, especially when the broad measure of unemployment increased, and hours worked fell.

It's good to see that the administration recognizes this. Brad DeLong:

Statement on the Employment Situation in February: [A]n unemployment rate of 9.7 percent is unacceptably high and we need to achieve robust employment growth in order to recover from the terrible job losses that began over two years ago.  That is why it is essential that Congress pass additional responsible measures to promote job creation.  It is also vital that we continue to support those struggling with unemployment...

Such as? What responsible measures?

The biggest and easiest would be another $300 billion in aid to states for the remainder of fiscal 2010 and 2011 to keep state and local services from suffering additional cuts and to shave perhaps 1.5 percentage points off the unemployment rate. Senators, however, are opposed to it: if they give money to governors, governors use them to cut ribbons and then run against senators to try to take their jbos. It would, however, be the right thing to do.

I expect Congress will implment a few token employment measures they can brag about in reeloection speeches, but I don't expect anything anywhere near the amount needed to be enacted. [Also posted at MoneyWatch.]

I have a discussion of today's release of data on claims for unemployment insurance at MoneyWatch:

Many are hailing this report as good news, but I have a different view of what the numbers say.

At MoneyWatch, I explain why Senator Kyl is wrong when he asserts that unemployment compensation cannot create jobs:

Unemployment Compensation has Broad Based Benefits

[And don't forget about The Importance of Automatic Stabilizers such as unemployment compensation.]

The release last Thursday of initial weekly claims for unemployment insurance showing 473,000 claims, an increase of 31,000 over the 442,000 claims the previous week, hasn't received nearly enough attention. Claims have been essentially moving sideways for several weeks now, and they are still far above the break even point at approximately 400,000 claims per week. The economy will continue losing jobs so long as initial claims stay above 400,000 per week. ...

Claims will be released on Thursday of this week, and I'll be keeping a closer eye on them than usual. If they continue to move sideways, it's time to worry.

I'd be less worried if it looked like a meaningful job creation package was about to emerge from Congress, but the proposals under discussion don't do nearly enough, and what little that has been proposed isn't happening as fast as needed. ... And while it's good that health care reform is coming back onto the front burner, that means that a job creation bill is unlikely to be the main priority for Congress in the near future.

Update: Maybe they were listening. If this bill does eventually pass, it will still be far, far short of what is needed, and much later than needed, but it's something. A meager something, but something nonetheless. 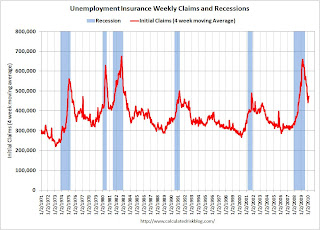 Click on graph for larger image in new window.

This graph shows the 4-week moving average of weekly claims since 1971. ...

The current level of 496,000 (and 4-week average of 473,750) are very high and suggest continuing job losses in February. This is the highest level since last November.

Action from Congress to stimulate jobs has been woefully inadequate. Voters will be right to blame politicians for failing to address this problem. Policymakers certainly had plenty of warning it was coming, but they chose to put their heads in the sand and ignore it, or to avoid the difficult politics of job creation policies by cherry picking the data in a way that convinced them that recovery was just around the corner.

I posted this at MoneyWatch:

Health Care is Important, But Don't Forget the Unemployed

At MoneyWatch, I argue that unless Congress can learn to walk and chew gum at the same time, which it's unlikely to do, a side effect of the renewed attention to health care reform may be less job creation and higher unemployment:

Update: Maybe they were listening. If this bill does eventually pass, it will still be far, far short of what is needed, and much later than needed, but it's something. A meager something, but something nonetheless.

At my blog at CBS MoneyWatch:

The Importance of Automatic Stabilizers

The Importance of Automatic Stabilizers, by Mark Thoma

Should We be Impressed with the Fed's $45 Billion in Earnings for 2009?

Did the Fed Cause the Recession?

Did the Fed Cause the Recession?, by Mark Thoma: I have been more defensive of the Fed's actions both before and after the crisis started than most, and I want to talk about why recent criticism of Bernanke and the Fed for their failure to use regulatory intervention to stop the housing bubble is correct, but perhaps directed at the wrong target. ...[...continue reading...]...

The Fed Can Help, But Fiscal Policy Is The Key To Job Creation

At CBS MoneyWatch, why I haven't joined the loud calls for the Fed to engage in quantitative easing as a means of creating jobs:

The Fed Can Help, But Fiscal Policy Is The Key To Job Creation, by Mark Thoma: There are many people currently criticizing the Fed for worrying too much about inflation and not enough about employment. They want the Fed to use quantitative easing - the purchase of financial assets when interest rates are already at zero - as a means of stimulating the economy and creating jobs. I think it's a mistake ...[...continue reading...]...

The Relationship Between Budget Deficits, Fed Independence, and Inflation

At MoneyWatch, some of the pressures the Fed might come under in the future if the government debt continues to rise, and the important role that Fed independence plays in making sure that the debt is not inflated away:

Budget Deficits, Fed Independence, and Inflation, by Mark Thoma: I have been critical of both Alan Greenspan and Ben Bernanke for giving recommendations concerning fiscal policy during their testimony before congress. In Greenspan's case, it was his comments about tax cuts that I found problematic, while for Bernanke it was his comments on entitlements.

What’s Wrong With the Dodd Proposal to Restructure the Fed

I just posted this at MoneyWatch:

This graph shows the recent trend in housing starts:

As the graph shows, starts bottomed several months ago, and have been "moving sideways" ever since. What is causing housing starts to move sideways rather than recover? Calculated Risk, one of the best sites for analysis of the housing industry, gives this explanation (which I agree with):

Total housing starts were at ... the all time record low in April of 479 thousand (the lowest level since the Census Bureau began tracking housing starts in 1959). Starts had rebounded to 590 thousand in June, and have move sideways (or down) for five months.

As he notes, an important piece of the puzzle is that the percentage of vacant units has been climbing and is now at a record level (see this report):

It is very unlikely that there will be a strong rebound in housing starts with a record number of vacant housing units.

The vacancy rate has continued to climb even after housing starts fell off a cliff. Initially this was because of a significant number of completions. Also some hidden inventory (like some 2nd homes) have become available for sale or for rent, and lately some households have probably doubled up because of tough economic times.

It appears that ... starts are now moving sideways - and will probably stay near this level until the excess existing home inventory is reduced.

This raises the question of whether the overall economy will echo this pattern of falling backwards after apparent improvement, i.e. of moving sideways for a period of time. This is something I don't think we can or should rule out as we think about the appropriate economic policies that we should have in place to help the economy recover from the recession.

How to Prevent the Next Financial Crisis

How to Prevent the Next Financial Crisis, by Mark Thoma

Why We Need an Individual Mandate for Health Insurance

Why We Need an Individual Mandate for Health Insurance, by Mark Thoma